'Somewhere In The City' 2017 at The Globe, Cardiff

After sounding out many potential venues, the Globe was chosen to host the big Roosevelt event.The gig was mainly to act as a tribute to a local band and their achievement of being around on the local scene for 30 years, their music and their home town; and also, a tip of the hat to the many great local players who had inspired them over the years, and the many great venues that helped make Cardiff’s local music scene so vibrant.

The planning of detail was meticulous, from the set list, to the lights, to the visuals & projection, the filming of videos even down to what the band members would wear on the night. Rehearsals were frequent, as the band fine-tuned and tightened up their act in readiness for the big day. 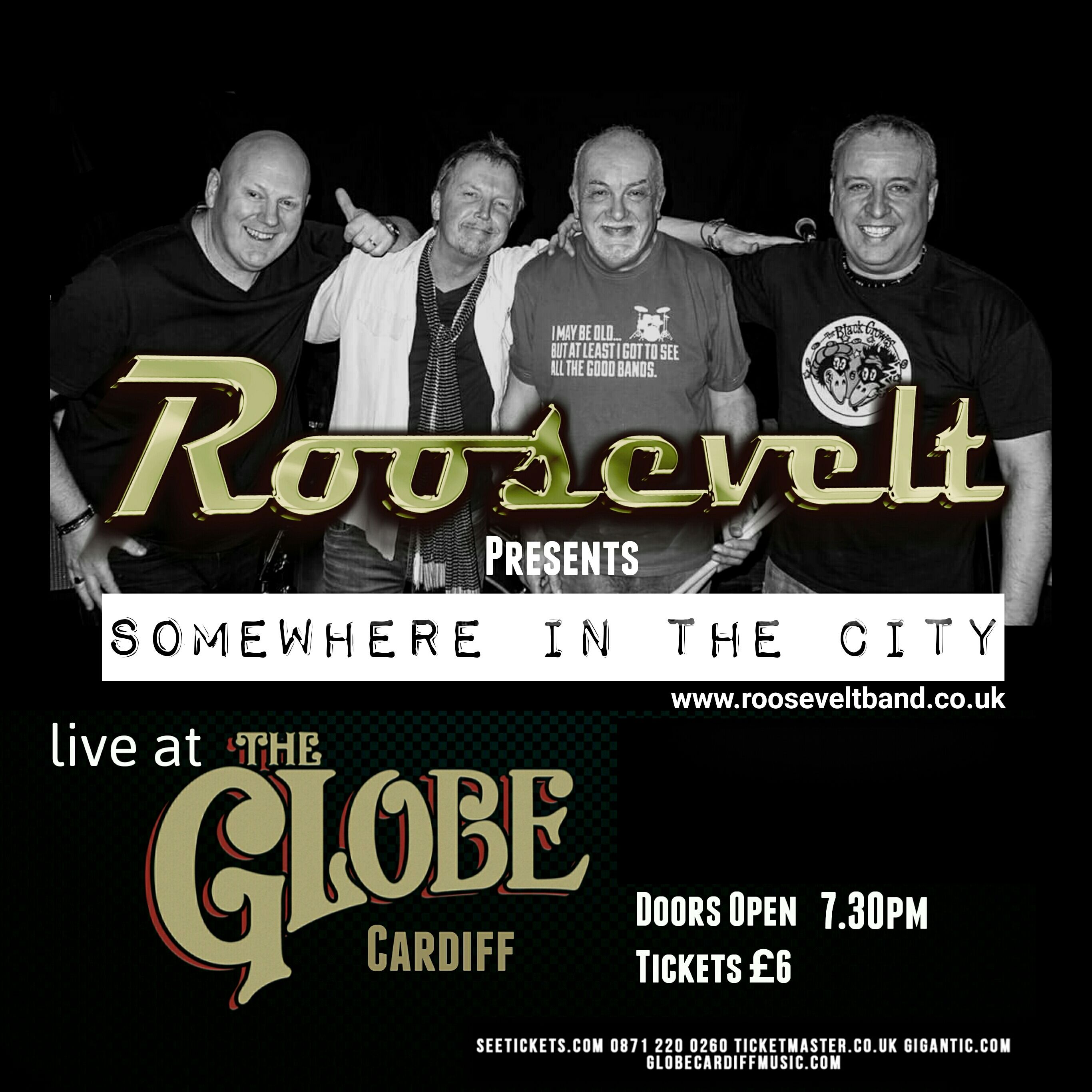 On July 15th 2017 Roosevelt played to a near capacity crowd at the Globe in Cardiff, supported by an the amazing duo ‘Omega 2’ (Pete Mathison & Jane Williams). The gig was hailed as a massive success and was a fitting tribute to everyone involved in the planning and execution of the show. 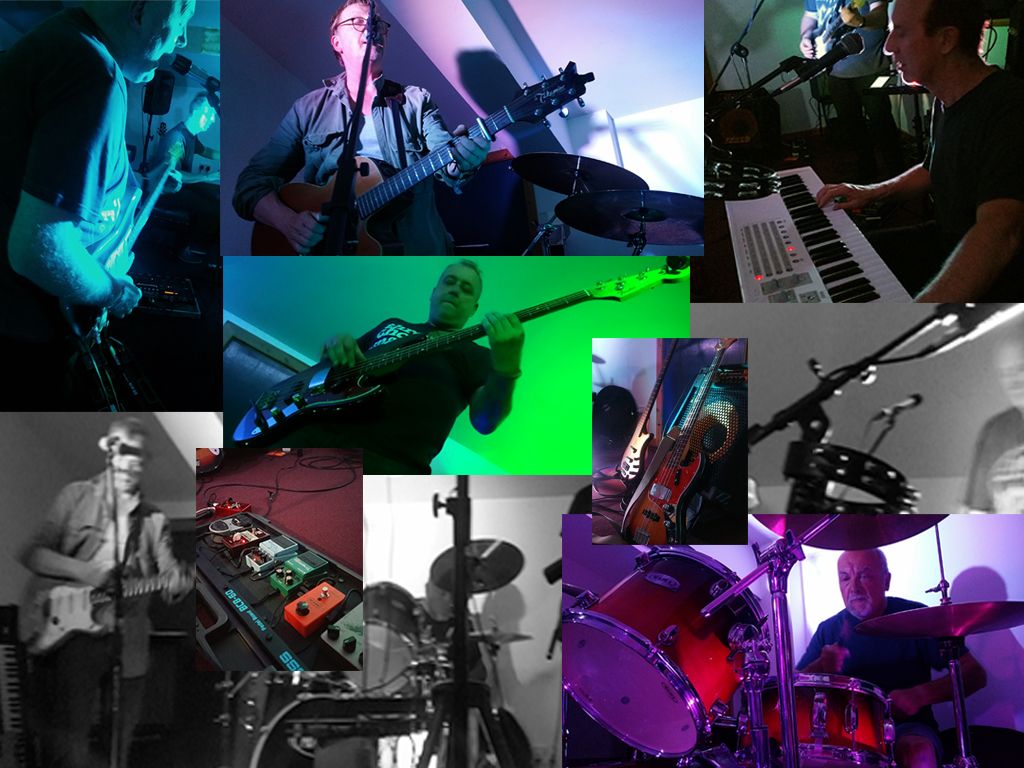 Almost a year to the anniversary of that gig, on July 14th 2018 Roosevelt will once again be playing at the Globe, only this time the show is going to be bigger, and better than ever before. There will be support from the stunning singer-song-writer, Bryony Sier.

There will be some old favourites but also some completely new songs introduced, and there will be a horn section (with the music arranged by Al Steele), something the band has not really used before.

Again, Roosevelt want to do this to pay tribute to the many players, bands, venues and people who in some way, are supporting and keeping music live in our beloved city.

For Roosevelt, the music scene, is not about who’s the best or who’s the loudest, it’s more about supporting each other as musicians, and helping each-other to survive on the local scene for as long as possible.

Cardiff – Did you know??

Cardiff was granted City status in 1905
Cardiff became the Capital of Wales in 1955
The population of Cardiff in 1801 was 1,870.
The City Hall and Law Courts were built at a cost of £276,317.
Buffalo Bill and his Wild West show visited Cardiff in 1891, 1903 and 1904.
The last public execution in Cardiff took place on July 25, 1857.
Perforated postage stamps were first used in Cardiff in 1853.
The River Taff once flowed through Westgate Street.
Cardiff's Ely Racecourse opened on May 30, 1855.
The Cardiff Police Force dates to 1836.
The area of land known as Wood Street was once called Temperance Town.
In 1950 the last Cardiff tram made its final journey.
Between 1850 and 1875 some 92 licensed premises could be found in the central area of Cardiff alone.
The first Mansion House was at 21, The Walk.
Ivor Novello was born at 95 Cowbridge Road East, in 1893. His real name was David Ivor Davies.
The New Theatre celebrated its centenary in 2006.
The first Cardiff pillar box was erected in (Queen Street) in 1855.
The first town clerk of Cardiff was William Thomas, appointed in 1690.
The first cargo of coal was exported from Cardiff in 1595.
The Hansom Cab made its first appearance in Cardiff in 1859.
The Continental Waxworks in St Mary Street closed in 1946.
In 1948, Winston Churchill was given the Freedom of the City.
In 1855 there were seven breweries in the centre of Cardiff.
St Mary Street is named after the ancient church was damaged in the great flood of 1607.
During the Civil War, Charles I visited Cardiff.
Author Roald Dahl was born in Llandaff in 1916.
The Wales Empire Pool, built for the 1958 Commonwealth Games, was closed in 1998.
The Westgate Street Fire Station was demolished in 1973 to make way for a multi-storey car park.
The parish church of St John the Baptist is the oldest church in Cardiff.
When the Bute East Dock was opened in 1855 the population of Cardiff was 24,200.
The Royal Infirmary was established in 1837.
Western Avenue was opened to traffic in 1933.
The largest ship to enter Cardiff Docks was the SS George Washington in 1928.
During the last war, 355 Cardiffians were killed in air-raids.
The much-loved Capital Cinema in Queen Street was demolished in 1978.
In 1947, the Marquesss of Bute presented Cardiff Castle to the citizens of Cardiff.
One of the most important features of old Cardiff was its town wall and gates.
In 1928, the wall mounted by animal figures outside the entrance to Cardiff Castle was moved to its present site.
During World War I, there was a proposal put forward to return the famed Billy the Seal of Victoria Park to the sea.
The masthead of Captain Scott's ship the Terra Nova was at one time displayed in Roath Park.
Cardiff's Tiger Bay is thought to have got its name from a song sung by Harry Moreton in the 1870s.
The land near the junction between Crwys Road, City Road and Albany Road was at one time known as Gallows Field and two priests, Father Philip Evans and Father John Lloyd, were executed there on July 22, 1679.
Hollywood actor Ronald Reagan, later to become US President, visited Cardiff in 1948 to publicise his film Voice of the Turtle.
The Taff Swim was held in Roath Park Lake from 1931 until 1961.
The Western Mail was first published in Cardiff on May 1, 1869.
The Guildford Crescent Swimming Baths opened in 1886 were closed in 1984.
Legend has it that Duke Street, widened in 1924, was named after Robert, Duke of Normandy, who was imprisoned in Cardiff Castle in 1126.
The first rugby international at the Cardiff Arms Park was played between Wales and Ireland in 1884.
Charles Street is named after Charles Vachell, who had a big part to play in the implementation of the Public Health Act (1848) in Cardiff.
Cholera killed 374 Cardiffians in 1859.
They used to hold water skiing competitions on Roath Lake.